When VW or any other auto manufacturer makes parts or commissions another company to make parts for them (Hella, for instance, that made trim rings for old VW’s), they end up with lotta new parts. I’m talking specifically about the parts made of metal – usually steel. The metal is shiny or at least smooth and often it’s natural grey color with no surface rust of any kind. They need lots of brand new nuts and bolts too. Everything is smooth and everything that’s made of metal has some kind of anti-corrosive substance applied so no corrosion develops between the time the parts arrive at the assembly plant and the time these parts are installed. But not only does this substance prevent surface corrosion on anything, it also acts a lubricant.  These conditions also make it so everything tightens well and mates properly. For instance, the surface of the inside of the reduction box housing on an old bus and it’s mating surface on the inside of the spring plate – over the years water has become trapped between these surfaces many times and causes surface rust. When one tightens them together in this condition after they’ve been apart for most reasons, they never mate like they did when they were new – unless the assembler floods these surfaces with WD-40 and sands the rough texture of the rust off. Then they mate like new. Anti-seize compound (take a blob out of the container it comes in, put it in a lidless container, dilute with engine oil and WD-40, and use the brush that came with it to slather on everything  – even the base of your tail light bulbs and especially the nuts that hold the tail light housing on the rear fender of your ’67 bug) on the bolts. And the fender bolts. And the bumper bolts and the ….. almost everything.

Lubrication doesn’t just mean changing the engine oil, checking the trans oil level and greasing the front end. Everything that moves on a car was lubed when it was new. Even the inside of the head light switch or wiper switch – they both had grease applied internally when manufactured. I haven’t tried it yet but I probably will soon – dipping a sticky head light switch in oil. It won’t hurt anything – oil doesn’t conduct electricity. I’ll have to let it drain for awhile but I know it’ll help. The switch will show it’s appreciation by lasting alot longer that would have otherwise.

Here’s how to keep those plastic heater knobs from breaking on your later model bay bus. Since the lever pulls the cables and the cables get sticky and new ones cost money, if your old ones don’t move so well but they’re not broken – the cables are unfixable at the front end but possibly savable at the rear if there’s enough length left to loop the end around a cotter pin so the cotter pin will engage with the connector at the heater flap lever but there must be enough cable sticking out of the tube when the heater is off so when heater is on, the cotter pin doesn’t cause the cable to jam at the tube before the heater’s all the way on.

I used to think rolling the cable up and letting it sit in oil for a few hours would do it but gravity always got in the way. Just couldn’t really get the oil to flow from one end to the other. Then … 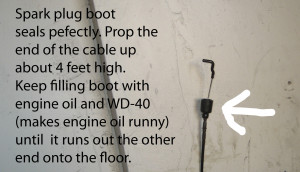 These cables have an internal sheath made of nylon I think. Over time, the friction increases probably due to a rough surface due to abrasion from the cable itself but it’s very common for them to be hard to move and it’s been that way for years. Not the best design but necessary for the heat controls to be on the dash. You can lubricate them as above and I guarantee they’ll work better than new and you’ll never break another heater lever. Works for all years of bay buses.

The mating issue regarding the reduction box  – if you’re building an engine, take the washers for the heads and smooth them out a bit using sandpaper on glass flooded with solvent or WD-40. Do the same with the nuts. Do it for the case washers and nuts if they’re rough. Make sure the head nuts in particular turn on the head studs by finger. Everything will mate like new.

And if you have opportunity (someone filled your neighbors swimming pool with engine oil as a Halloween prank), dip the whole  car in oil.  Works for all makes and models.