These are a few of my customers cars … 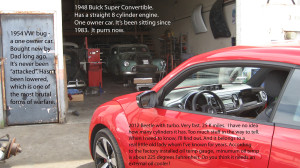 The Beetle is the newest car I’ve ever worked on. Wanted to remove the back seat for the owners dog to have a little more room. Pass on that. Seems like one would have to remove nearly every single interior panel to pull that off. Dog will have to settle for the seats folded down and no headrests.

The Buick is the oldest car I’ve ever worked on. My customer’s father bought it new. It’s in good hands now. He asked me if I’d like to work on something a little different. Here it is. It’s been sitting since 1983. It’s still got the original leather seat upholstery. No tears. It’s been painted one time. I got it running and did the brakes.  Carb. Distributor. It purrs. Dome lights still work. So do all the gauges. Needs a gas tank and an exhaust manifold.  It’s a relic. I’m protecting it from malpractice. And preserving it for the future.

I’d like to think the reason my customer entrusted me with this valuable piece of American history that likely holds some fond memories and deep emotional ties is because I’m the one who made the sun visors in his 1970 bus function properly after languishing for about 15 years unusable because the wooden camper roof was redone and since it’s dimensions were a little off,  the visors just wouldn’t clear it. I made spacers for both the visors and the visor clips. They work like they’re supposed to. It may seem trivial – sunvisors. Well, no job is too small. And just like the horn (actually, the “warning signal” according to VW), the trivial sunvisors may  save a life someday. Just that glare, that one time – disaster. Car manufactures put them on for a reason.

But prior to the visors,  I brought his bus brakes up to par. They’d had a rather low pedal ever since the car was completely done up by a very well known, full page advertiser in Hot VW’s Magazine, who, along with his “improvements” to the drive train, also converted this bus to stock  74 and up bus front disc brakes.  Seems this “expert” needed some education in the art of brake pedal free play. Elementary auto shop bs. He flunked big time. I fixed it.

Anyway, the first VW I ever worked on was my parents  red ’66 bug with 30,000 miles on it. It was about 1971. I hot wired it.  It was easy. I had no book, it just came naturally. It popped out of 2 gear on the over run. They bought it like that used. Don’t know what they paid. Pretty car. I remember what they looked like; what they’re supposed to act like. Feel like. Sound like.

The ’54 – I’ve been working on it since about 1997. Made the semaphores work with 12 volts without armature conversion. Proper voltage reducers do the trick. And they’re not the ones you’ll find in any catalog. I found the ones that really work. Same for the wiper motor. How many times has this vehicle let down the owner? Never. How many times a year does it spontaneously just break down as you’ve been told VW’s are  prone to do? Never. How many times does it come it for “service”? Less than once a year. VW’s are not to prone to breaking down. It’s something else*.

In about 1978  I started working in a real VW shop. The owner was the former shop foreman at Wester VW in Monterey  for at least part of the sixties and maybe into the seventies. He was a craftsman. He was asked to leave the dealer because, for example,  rather than put a new generator in a car, he’d choose to simply put new brushes in if that was a viable, long term fix. He built his own model, working live steam train. Several, actually. I watched him build a couple. One was not steam but made to look like an electric locomotive. It was powered by a 36 hp Volkswagen engine. It had lots of exhaust pipe length. It was real quiet. Long before the VW shop, he fixed Caterpillar tractors in the  outback of Australia. One has to know how to actually fix things when you’re in the middle of nowhere. You can’t just run down the street to the parts store. And before that – in the latter half of the 1940’s – his first experience with a VW was driving around in abandoned Kubelwagens as a teenager in  Czechoslovakia  after World War 2. I’ve seen pictures. So I guess he’d had at least 30 years experience when I started working for him.

But he didn’t teach me how to fix Volkswagens  though- he taught me how stuff works. And how to keep stuff working.

I’ve also worked at Wester Volkswagen – the local dealer – in the early 80’s – Rabbit’s, Vanagons, Dashers, and those nice diesel pickups. Didn’t long. Just wasn’t for me.  The 67 bug I drive now was bought there long ago. It’s still got the Wester VW license plate frame. It’s still real original – hasn’t been attacked yet.

I’ve got a Bachelors in Science degree in geology from UC Santa Cruz where I learned the art of critical thinking. And the scientific method. I’ve spent some time being a geologist. In  far away places. Got to those places by car. In a 66 VW bus. I still have it. It’s got a type 4 engine in it now. Climbs hills like a tractor.

I made my way through school fixing VW’s.

Been doing it all along, regardless of employment.

My aim it to make an old VW work as it was intended to.

Not a vehicle to drive to the show or around the beach on a Sunday. But an actual vehicle to you can drive anywhere carefree. To Alaska. To Burning Man. Or maybe just to Yosemite every weekend. With the occasional deviation to Death Valley. In the summer. Or winter …  or Boundary Waters Canoe Area on the Canada/Minnesota  border.

I’ve done them all myself. But I haven’t been written up in Hot VW’s magazine. I’ve been too busy driving around the country or actually fixing the things.

My road to work … 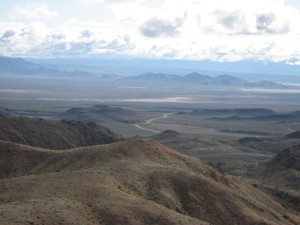 Somewhere in the middle of Middle of  Nowhere, Nevada, US

There’s a lotta VW mechanics in California. They’re all over the place. But there’s  a reason that when Vintage Safari Wagons – a small business in Costa Mesa, California that rents VW campers to clients from around the world –  wanted a 1978 VW camper completely mechanically overhauled from one end to the  other, they brought it to me  – about 360 miles away in Sand City, California (Sand City touches beautiful Monterey, California) and here’s the reason …

When you start your VW at 2 AM in the middle of nowhere, do you want it to say “What now?” or “Where do you wanna go?”.

If your choice is the latter, call me.