Categories
Posted in: Uncategorized
How to do a grease job on a Volkswagen, like the one you just bought

Apply grease, oil, or anti-seize (dilute a small portion in separate, dedicated container with engine oil or WD-40), dependent on what it is, to everything that moves and a lotta things that don’t  …

The normal, not “self tapping” bolts for the pan under the front of a bus

Accelerator pedal swivel pin and each end of the pedal  link

Pedal assembly on all except buses. You’ll need to remove it and completely take it apart to do this. Grease the hook and cable eyelet liberally. Oil the roller, roller pivot and and put a little grease on the slider on the back of the pedal where applicable

Vent wing latches. If you have a frozen latch, lubrication combined with gentle coaxing with a pair of pliers will usually  get it moving again.

The lower vent wing pivot, then adjust tension so it stays open at 60 mph. And I don’t mean do this when the vehicle is moving at 60 mph, do this with  the vehicle stationary while you’re fixing the door locks and the door panel is off. For Vanagon, since the engineers were drunk when they designed this, you’ll need teensy Vise Grips to turn the misoriented Phillips screw – the head points away from vehicle. Otherwise, you’ll either need to remove the window entirely or drill a hole through the outside of the door to use a screwdriver so to avoid these 2 options, you need teensy Vise Grips

Latches for the sliding windows on split buses

Every single screw, nut, and bolt inside a door.

The screws or bolts that secure any hinges

Handbrake cables including the threaded ends

Handbrake levers on the rear shoes

Heater cables, the heater knob assembly (early, most models)) or the heater levers (later, all models). Tension on these levers is adjustable by tightening/loosening securing nut for all models with levers.

Bay buses have the “Push the Rope” heater cable design. If your bay bus levers are hard to move, it’s usually the cables. Replacing the red levers is a waste of time until you make the cables move freely. You’ll just keep breaking levers with too much force. If the cables aren’t broken, try removing them, rolling them up like a rope an letting them sit in container of old engine oil for a couple days. 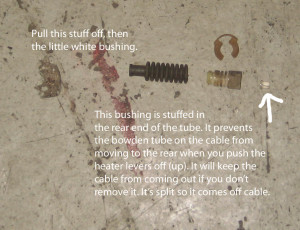 Lube before installation so they go in easy. If you have a cable that won’t come out no matter what you do or you can’t get one to go in or if it does go  in  but seems to bind more when installed in the tube than when operated just laying on ground (check for free movement before installation with the cable bent mimicking it’s installed position), they’ll actually work fine if you just plastic tie them to the outside of the tubes. Secure well at the heater box end with a plastic tie because this tie will be doing what the little white bushing does for normal installation – keeping the cable from pushing out of the tube when you turn the heater off. During removal, make sure you remove the cable securing parts at the heater box end of the tube before attempting to remove cable. If you don’t and try to remove the cable, it just won’t come out and you may destroy what was a good cable. Don’t loose the clip that secures the cables to the engagement hole on the levers. Early models had a spring clip that easy to deal with and not too easy to loose if dripped but don’t lose it – it’s found in many places, but only on a VW. Later models have a teensy circlip (some call it an “e” clip). If you drop it, you may never see it again but you can probably pick one up in a typical auto parts store. Do one cable at a time so you don’t mix them up or at least pay attention. Mixing them up means doing this twice. Heater cable flex tubes are thinner than the defrost and rear outlet cables on later models – easy identification when handling them under the dash. Early models, not sure, several changes/variations through the years.

Shift lever – lift boot and flood with engine oil. The bushing underneath (bus), or in the tunnel (everything else)

Window regulator (possible without removal except in worst cases; do this when you fix the door locks)

CV joints practically last forever with adequate grease even with years of poor protection from trashed boots.  If they are noisy, it’s usually a lack of  fresh grease. A real noisy joint is usually curable by new grease. Grease “dehydrates” over time and looses it slipperiness and that’s usually the reason a decent joint will make noise. Smooth balls and shallow wear (6-10 thousandths in the races) mean a decent joint but it’s a judgement call too.

Door hinges. Use engine oil for nicely working hinges. If the door is sticky, spray with WD-40. You should see the WD-40 flow away from the hinge the color of rust. If not, keep spraying. If nothing changes, leave it for a few days. If may actually free up. Or keep flooding with WD-40 until you see rust flowing out. Eventually the door may be free. If it just won’t happen, consult a body shop. You can use brake or carb cleaner to flush out the WD-40 and thus carry the solids (causing the binding) with it then when outward flow is clear, apply WD-40 again. Progress takes time.

On  a restore, lube the pan to body bolts, the door hinge bolts, striker plate bolts – all the bolts everywhere, EVERYWHERE!!! Restoration give you the opportunity to do this. Makes the car quieter too. This is true.

Otherwise, for the pan bolts, just tighten them all. After all, the last time anyone touched them was at least 35 years ago for the last US bound 79 convertible. You may feel the difference.

Pretty much every single bolt or nut or screw on the car would love it  if you painted a little anti-seize compound on it Even the little screw that holds a split bus headlight switch in. And it will be more effectively tightened to so the switch will stay put better.

The aluminum bezels that hold many other switches to the dash.

The horn button and mechanism will often benefit from a tiny dose of WD-40.

WD-40 can free up a sticky switches including floor mounted dimmer switches. Use sparingly on a turn signal switch if it’s you’re only option.

The seat tracks. Oil the lever and the spring on the seat frame

And don’t forget to grease the front axle.