Categories
Posted in: Uncategorized
Why your speedometer cable broke …

If you encounter a broken speedometer cable, the most logical thing to do is to replace it and continue to rack up more miles on your fifty year old car. It’s possible you’ll have no more problem for a long time. But to be sure, you should check for ease of movement at the bushing that the cable turns at the speedometer. It’s often the cause of a broken speedo cable because if it’s hard to turn, the cable encounters a lot of twist and eventually it will break. If you don’ t check the bushing for free movement and  it’s sticky and you just put a cable in, your new cable can break  as soon as the front left wheel begins to turn. Also, if your needle wiggles it’s often just the cable but check for free movement at the bushing because a sticky bushing can also make the needle wiggle because it’s makes the cable twist … then untwist … then twist … while your driving. This also  makes the needle wiggle. 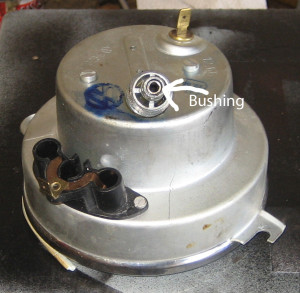 Inserting a small screwdriver (or the end of your old or new speedo cable) and see it there’s any resistance. If so, you’ll need to free it up. Put a couple drops of WD-40 on it and give it some exercise with your turning tool. It it still won’t free up, you need some heat. Just  few passes with a butane or acetylene torch will do it. You just want it hot to the touch – don’t melt anything. After it cools a little, add a little more WD-40. The remaining heat help let the lubricant flow into the space between the bushing and the surrounding housing.

You may have to do this a couple times. Consider using brake cleaner or carb cleaner to wash out any solids inside the interface between the bushing and the housing. Eventually you should be able to get the bushing to turn freely. After you do, put a couple drops of engine oil on it and let it sit for a few minutes to the oil can fill the interface then reinstall.

You’ll need to have your speedo rebuilt if it makes noise. If the odometer doesn’t work, you can take the speedo apart and find the broken mechanism or gear. If it’s just a gear, you can find one online. This is real common on bay window buses and Vanagons. For older models, it’s not so easy. You’ll need a speedometer rebuilder to solve it.

You can find gears at a place called odometergears.com.

Here’s why they make noise …

Imagine you have to pie pans. One fits just inside the other but if you center the inner one, there’s a small gap between it and the outer pan. A speedo has something very similar inside and they’re both made of steel and are thus magnetic. A speedo rebuilder must determine the proper amount of magnetism for I believe the inner “pan”. As it spins with the RPM of the cable, it moves the magnetic outer pan to which the needle is attached. The outer pan does not rotate fully, it just move a little – dependent on the speed of the inner one. It’s the “grab” of the magnetism that makes it move. Speedo rebuilders magnetize the inner pan a bit then use an oven to decrease the magnetism down to where it really belongs for the given application. They also repair the bushing the inner pan spins on to make sure it remains centered relative to the outer pan so they won’t actually touch. Pan touching is what makes the unbearable screaming noise from your old speedometer.

Reinstalling the speedo is pretty easy including re-attaching the wires/bulb holders but always check to make sure the oil and generator light wires are not switched. Best thing to do is connect the left (driver’s side) one first. This is your generator light. If it’s on with the key on, disconnect the wire at the oil pressure switch. If the light doesn’t go out, you’ve probably got it right. Now connect the other wire. If it’s on, disconnect the wire at the oil pressure switch again. The light should go out. Of course, there’s a lotta variables here but the main thing is you always have a working generator light and you must know which one it is because you need to know if you’re generator belt is broken so you know your cooling system is working. You never want to go anywhere in an air-cooled VW with a non-turning cooling fan. The generator light is the most important light on the whole car.