Categories
Posted in: Uncategorized
Why not to put the voltage regulator on the fan housing

Lot’s of 6 volt VW’s out there have been converted to 12 volts. If you require a voltage regulator for the 12 volt generator, put it under the back seat where VW put it starting in 1967. You’ll need a couple holes to mount it. Don’t use a drill. A drill will remove the metal. Best way to mount it is to use an ice pick or something similar. This will not remove any metal and you’ll end up with a hole like the exit hole in a can that’s been shot with a bullet. That way, you’ll have plenty of purchase for the self tapping sheet metal screws you’re going to have to use and thus make it very unlikely for them to strip in the future.

Here’s what can happen to your regulator when it’s subject to the vibration from the fan housing:

This is where it really belongs … 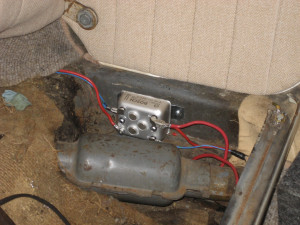 This is the solid state version. I’ve never seen one go bad but they have a problem – when the generator is turning (making electricity) the whole surface is positive 12 volts. Therefore, you have to make sure the surface cannot touch metal so be careful when mounting and pay particular attention to the bottom clearance.

VW was careful when they mounted it too. This one’s in a ’67 bug. It’s a Brazilian version of the original. 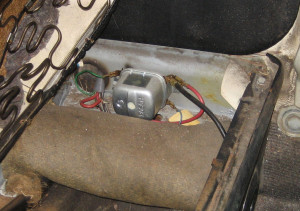 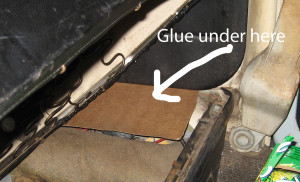 Think that’s lame? Here’s the original piece of cardboard installed on the assembly line in Germany … 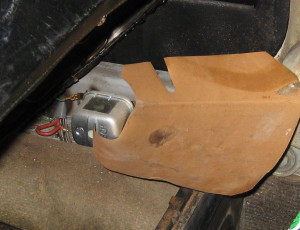 It tucked under the panel – no glue required.

Here’s where the connections go … 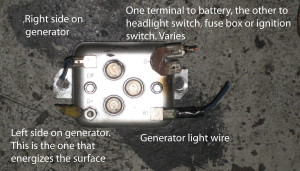 The old version is prone to failure. One thing it can do is allow the generator to overcharge. The worst thing that can happen due to this is it makes the generator get hot enough so that the solder on the armature can melt. This will destroy your generator. Also, if you have a squareback with original fuel injection, the early regulator can also make your vehicle run poorly. If the dome light is working, watch it during idle – if it seems to be flickering – basically varying in brightness – it’s probably the regulator.  Put a solid state one in. It’ll probably fix it. You may also hear a faint clicking coming from under the back seat with this condition while driving and maybe at idle. This clicking condition can happen on any model.

Solder all connections. When using any kind of crimpable connector, remove the plastic so you can see the result of your crimp. Then solder. When using butt connectors, also remove the plastic then crimp and then solder. Try to match the original color coding of the wiring instead of using all orange wires, for instance. You’ll find plenty of cheap wire in many nice, muted colors (the German way) in the junkyard.