This works for an (the best one available at this time) aftermarket mechanical type sending unit for bugs from 1962 through 1967. Whatever you do, don’t buy the white plastic one unless you like the depression on the top of your tank full of the gasoline that will inevitably leak through the white sending unit. Your gauge won’t read right either. It’s basically junk. I don’t even know why they make it in the first place. Maybe they never checked to see if it worked.  Or … I can hear it now:

“Are the new sending units ready for packaging and shipping to everywhere else but here in China? ”

Step one –  empty the tank.

The second step is all of the following:

Moving the lever to the front is full, to the rear is empty. At least, it supposed to work that way.  But you’ll probably find when you move the upper lever the cable attaches to to  the full position, the float hits the back of the tank so you’ll have to shorten the lever like this … 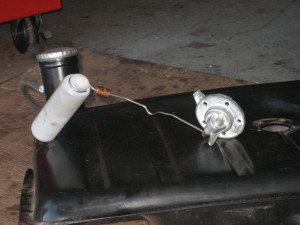 It’s been awhile since I did this but I think the float was pointing to the passenger side and that was also a problem so just switched it around so it points to the driver’s side like an original. 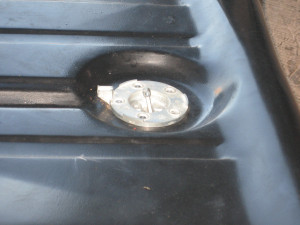 Yours will probably move farther to the right than this one (I lost the pic), but it still won’t go all the way to the right as it should in full position.

So, using the adjustment screw, move the lever as far to the front as possible … 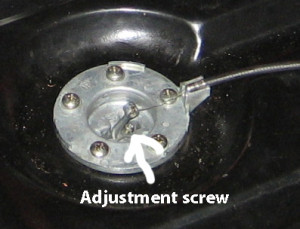 It needs to move all the way to the front of the top of the sending unit and reach it’s limit  – it much touch the end of the slot it protrudes from when pushed all the to the front (full tank position). You may find it necessary to bend the lever in the tank if the float hits the top of the tank. Thing it, you gotta do what you gotta do to make that lever go all the way to the front’ of the slot. If the adjustment screw won’t allow it, bend the lever. I can’t remember if I did. You’ll find it necessary to do this work both with the sending unit installed in the tank and with it out of the tank in your hands. After you manage to make it so the upper lever reaches the end of it’s travel defined by the end of the slot it protrudes from, you’ll find the cable seems to short to reach the lever. In full position, the upper lever must remain in it’s full position touching the end of the slot even when the cable is attached or the vehicle will never read full. In full position, the sending unit shouldn’t even be aware of the cable  that it’s attached to – the cable should exert zero pull on the lever. But it probably won’t – it’s as if the cable is too short …. 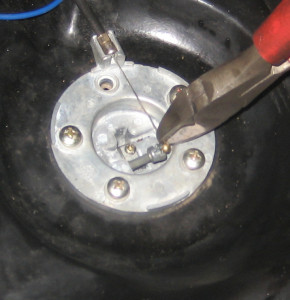 It just doesn’t quite reach. Just a little pull will cause the gauge to say full when it’s not. You may have  3/4 to a 1/2 tank fuel before the needle on the gauge even begins to drop from full position.

And it’s true, the cable it too short or the sending unit is too … something.  But the solution isn’t in making the cable longer. Don’t even think about it. You’ll probably fail. The answer it to make the bowden tube shorter. Cut the plastic with a fresh razor blade flush at the end of the ferrule then grind off one the side of the ferrule off but don’t mess up the end …

The cut off one complete winding …

You can use a bench grinder or a file to entirely remove the winding but don’t mess up the cable. You may need a jewelers file or some real small pliers. It can take some ingenuity but don’t mess up the cable – no kinks or breaks. Minor bending of the cable  is not a deal breaker but a tiny bend may bind at the end of the bowden tube so be careful. Now trial fit with the ferrule in place. Make sure the bowden tube reaches all the way to the end of the ferrule – it must seat well. You’ll need to remove all traces of plastic for it to bottom out properly. Check to see if the cable exerts any pull on the sending unit lever. If it still does, take off another winding. When you finally get it right and there’ no pull on the lever  (a teensy bit of slack in the cable is perfect – just enough to be discernible – that way the float isn’t pulling the cable taught and stressing it), squeeze the ferrule a bit with a pair of pliers to secure it but first place the ground off side down so you can’t see it. And since the bare end of the bowden tube is shorter than when you began and assuming you cut carefully with a  fresh razor blade, when you slide the ferrule on, it should slightly overlap the end of the existing plastic  a bit and after you put the cover for the sending unit on, you won’t even tell you messed with it and it’ll work …

I’ve used this method to make a gas door release cable for a 1970 Karmann Ghia  work and it was genuine (had the emblem on the part and the part number) from a well known aftermarket supplier. The lever on the cable wouldn’t engage with it’s engagement dealie on the gas door because the cable was effectively too short because the bowden tube was too long.