Categories
Posted in: Uncategorized
How to make a nice car nicer (there’s a lot more to a car than fancy wheels)

And if you wanna lock it, use search on this site using “latch” and read it all. There’s more useful stuff regarding latch repair but they often need nothing more than lube, then maybe a spring, then … read. You’ll find it. It’s just than I needed a spring today, had no more used ones and found this at Fastenal. It works.

You may find this spring is broken (missing since it likely broke long ago and fell away).  With this spring broken or missing, your front door locks will never work right regardless of that brand new repro handle. Or nice used German handle. Or even an NOS German handle.

The pic shows a pic of the latch and the Fastenal spring, the Fastenal springs’ bag,  and Fastenal part number on the bag (it’s one of the two long ones – bring ’em both to Fastenal. They probably have it in stock. Cost – about ten bucks for 2). Cut the Fastenal spring so it’s about 1/4 to 3/8 ” shorter  than the distance between the anchors when the anchors are pushed together. The one in the pic is just right but I didn’t measure it before I used it and it’s not a Rolex – spring just has to work as in pull the parts together. Anchors are shown by the arrows. Bend the ends so they look like the ends in the pic and orient like the pic. Install the left end first and the other end second. It’s tricky but possible. A small ice pick – like tool  is very helpful for pulling the left end over the anchor. Small needle nose work well for the right end. With grease all over this latch and particularly on all the springs in the latch, then an engine oil drench followed by  a  WD-40 drench (let it drain before installing and don’t be stingy with the lubricants and spray grease is much less effective than grease in a can)  your latch will work like new and thus your key will work flawlessly will little effort – like it did new. The key is a lever and operates on all the levers in this latch. Springs assist. Lubrication makes it all happen with minimum effort. This spring used to be available at the dealer but no longer. This applies to most all bay buses but all VW latches have springs. This one’s pretty small and often broken. The latch shown below is from a 1977 bus front driver’s door. 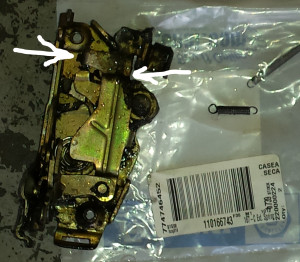